We crossed the huge cable bridge that joins the Peloponnese to the mainland as Tom told us about the many naval battles that had been fought in the waters around us throughout history. It was hard to reconcile the sparkling views with where Cervantes, author of Don Quixotes, lost an arm. Athenians and Spartans alike died in its water. In the distance was the town where Lord Byron died of sepsis fighting for Greek independence.

Maybe that was one of the things that I needed to come to Greece to really understand. How vital a role the land itself has always played in the varied history of the country.

Such is the case at the sanctuary of Olympia and home of the ancient games. 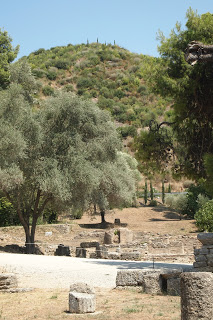 Behind the site stands the hill of Cronos, legendary Titan and father of Zeus, which is thought to have been the site of an ancient sanctuary to Gaia. 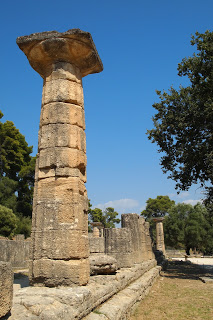 The first temple we know was built inside the sacred boundaries of the sanctuary was in fact a temple to Hera, not Zeus. This site is still where “priestesses” to Hera light the Olympic torch for every modern Olympic games. Olympia was also where in the later temple to Zeus the famous Chryselephentine statue stood that the modern Lincoln memorial is based on. The statue has been missing since it was removed from the temple by the Roman emperor Coligula and it thought to have been destroyed in a fire in Constantinople. 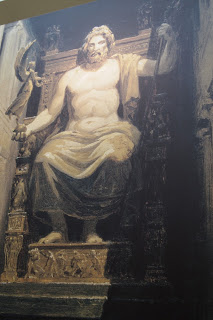 But the highlight of the visit was probably the Olympic running track and entering it through the secret gate that would have once been completely buried and only for Olympic athletic and victors. 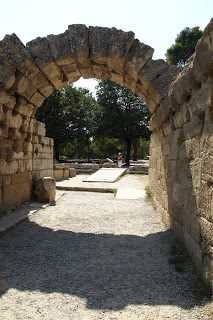 How could we not try our luck at a race? Though bare in mind that it was like 35 degrees Celsius. One guy passed out (the one in the red t-shirt and black shorts, I’m in green behind him). 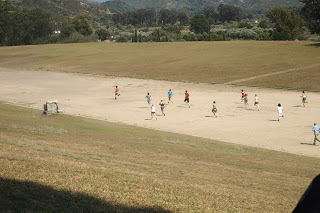 It was such a visceral way of connecting to history stretching back thousands of years. 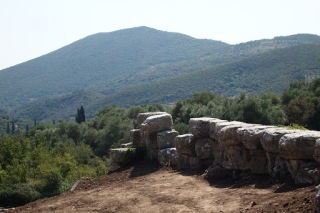 It was only moderately more dignified then in the stadium of the Messene the city of the former Spartan helots (slaves) who made it possible for the Spartans to have such a large full-time military. After independence they were supported by Sparta’s enemies to found their own city.

There wasn’t going to be anymore running after the heat-stroke of Olympia so excess energy from the long bus rides got worked out in a water fight. 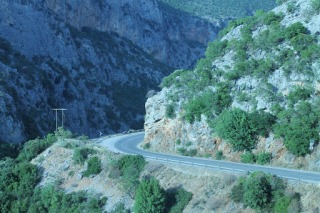 After a beautiful driver through the mountains we reached Sparta, or as the modern city is known, Sparti. Sparta is much poorer than Athens and the lack of remains of the city of Sparta means that it doesn’t have any like the same amount of tourism. This means to some people the city seemed quite run-down and unattractive, even “dodgy” but I found it pretty appealing in its own gritty way. 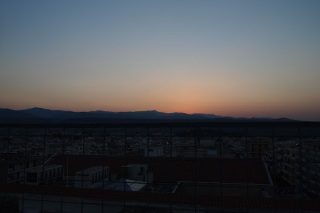 The next morning we got up at half six in the morning to watch the sun rise over the mountains.We were tired and grumpy but the light display made it very worth it. 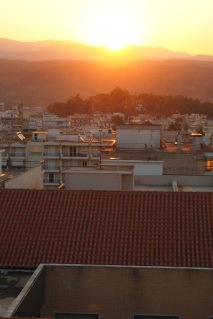 Then we walked up to the Spartan acropolis where there was still a beautiful theatre preserved. 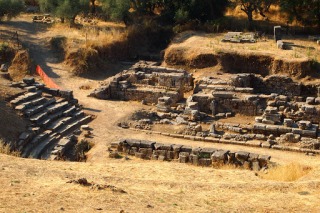