“The memories of his ancestors become habits” 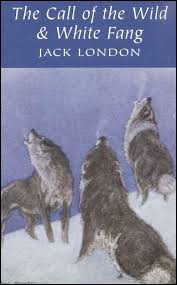 There were few books I was more surprised by when I went looking for banned books than this. There were stupider ones (like Harry Potter encouraging witchcraft) but this one was a bit out of left field. Technically it’s more of a short story than a novel but this is my blog and I’ll do what I like.

The story is told entirely from the point of view of a dog named Buck, who is kidnapped and sold from his pampered city home and sent to serve in the Alaskan gold-rush but conquers not only the elements and toil but any attempts to break his pride.

I heard from one source that people thought that it supported animal cruelty which is one of the silliest reasons for banning a book I’ve heard so far on this project not least of which because it is completely untrue. Now London was a well know Socialist sympathiser so quite a look of his work was maligned for that reason alone.

The book follows the life of a dog called Buck, who is kidnapped from his comfortable home and sold to pull sleighs in the Alaskan gold-rush. It follows his sentient reaction to abuse and the relationships he forms with other sleigh-dogs.

London elegantly dealing with the themes of civilisation versus nature, cruelty and love, and the inexplicable thing that is instinct.