“It was a bright cold day in April and the clocks were striking thirteen.” 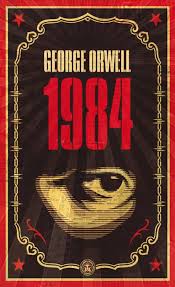 “…the clocks were striking thirteen.”

I love this opening line. It at once is completely of our world and completely not. Famiilar and foreign at the same time. The cold bright April day is so mundane but there is something alien in the idea of a clock striking thirteen even in the age of digital watches. It is of our world and yet not, which is the setting for Orwell’s infamous 1984.

I like some science-fiction that makes a point. I like fantasy or dystopia that highlights political issues when done well. Some people don’t this at all and this will always colour their reviews, it’s a controversial technique.

I would recommend that everyone read this book at some point in their lives, not because it has stunning prose or is even enjoyable to read but almost because it is the exact opposite. In a lot of ways it’s a horrible book and horrible to read but it’s still a masterpiece of political fiction.

It forces us to think about the darker, dirtier parts of our own souls and confront our own demons. It leaps off the page, grabs you by the throat and screams at you that you too are weak and corruptible. It’s not a nice reality, it’s not pleasant to plow your way through the depression and horror in it’s pages but when you finish 1984 I think you feel a sense of having learnt something.

Winston Smith is a difficult character to relate to but in many ways I suppose that is the point. He’s uninteresting and yet he pushes back against the brainwashing of the state and begins to see the flaws in the doublespeak.

He can be an uninteresting hero just as more outwardly striking people can be traitors and cowards.

It’s a sad ending of defeat but the message itself is important. Forewarned is forearmed.